One Week in December 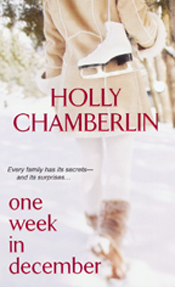 Every year the Rowans gather at their family farmhouse in rural Maine for the Christmas holiday. This year, Becca Rowan has driven north from Boston with one thought in mind -- reclaiming the daughter she gave up when she was a frightened teenager.

"ONE WEEK IN DECEMBER is one of those novels that will remain in your heart long after you read it."  – FreshFiction.com  Raised by Becca's older brother and his wife, Rain Rowan has no idea she was adopted. And though Becca agreed not to reveal the truth until Rain turned twenty-one, lately that promise, along with  all her career success, counts for little in the face of her loneliness and longing.

But Becca is unprepared for the depth of her family's reactions to her announcement. Her brother is angry and fearful, her sister reveals long-buried resentments, and her parents are torn between concern and guilt. And as the family's neighbor, Alex, draws her deeper into an unexpected friendship, Becca begins to challenge her own preconceptions about family, about love and about the courage needed to live with -- and sometimes change -- decisions we make...